Before explaining how to install Firepath, I would like to explain why Firepath is used in Selenium Test Automation. Firepath is used to create the CSS and XPath locators to locate the UI elements of the Web Application Under Test. (Locators concept will be explained later)

What is Selenium WebDriver ?

Downloading the Selenium WebDriver for JAVA

Set Up Selenium WebDriver with Visual Studio in C#

In this section we will learn to Set Up Selenium WebDriver with Visual Studio in C# which cover the following topics:

1) In the Solution Explorer window, which is on the right side of the Visual Studio in the above image. Right Click on the Program.cs and Select Rename.

3) The new name will start reflecting everywhere in the project or code window.

3) Once Visual Studio is finished with the successful installation of the Selenium WebDriver, it will generate the output logs.

Now that we have the Selenium DLLs referenced in our project its time to test the configuration by running a quick test.

1) At the top of your project code after the last ‘using’ namespace add the following Selenium namespaces:

2) Add the following code in your static void Main section:

Note: We will come back to the understanding of the code later, once we start with Selenium Tutorial, but as of now just understand that the above code is creating an instance of Firefox driver and opening an URL in it.

3) Run the test by clicking on the Start button given on the top bar.

Notice that the Visual Studio started a Console application and just followed that it initiated a Firefox driver and opened the website.

1.  Create and configure a project

2.  Right click on the Project and select ‘Package’ option as shown below: 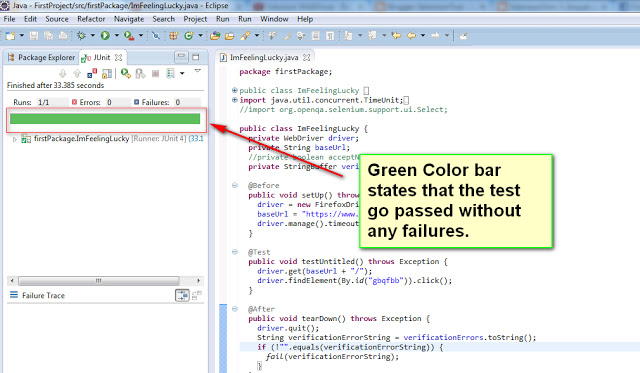 3. Ensure that ‘New Java Package’ dialog is displayed, enter “firstPackage” as Package Name into the ‘Name’ text box and click on ‘Finish’ button as shown below: 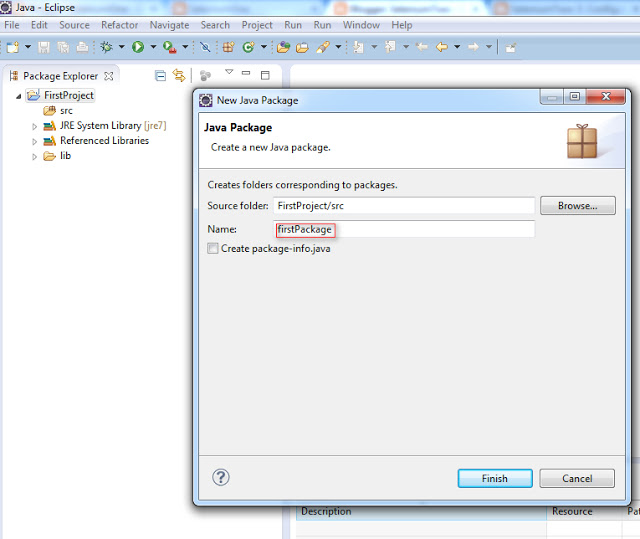 4. Ensure that the New Package got added as shown below: 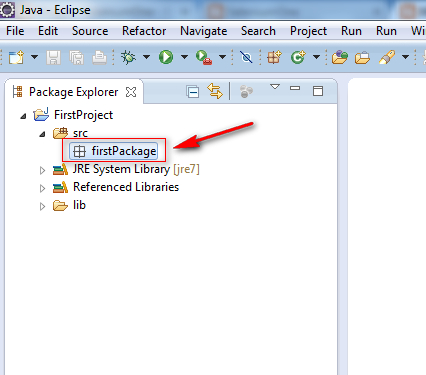 Create a New Class under the above created Package

1. Right click on the newly created package and select ‘Class’ option as shown below: 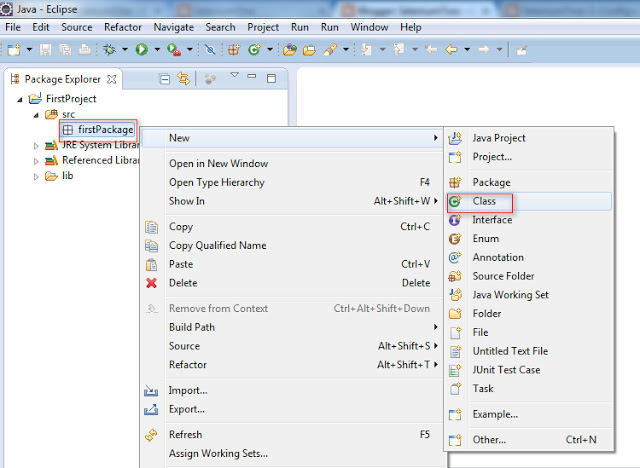 2. Ensure that ‘New Java Class’ dialog is displayed, type “ImFeelingLucky” class name into the ‘Name’ text box and click on ‘Finish’ button as shown below. 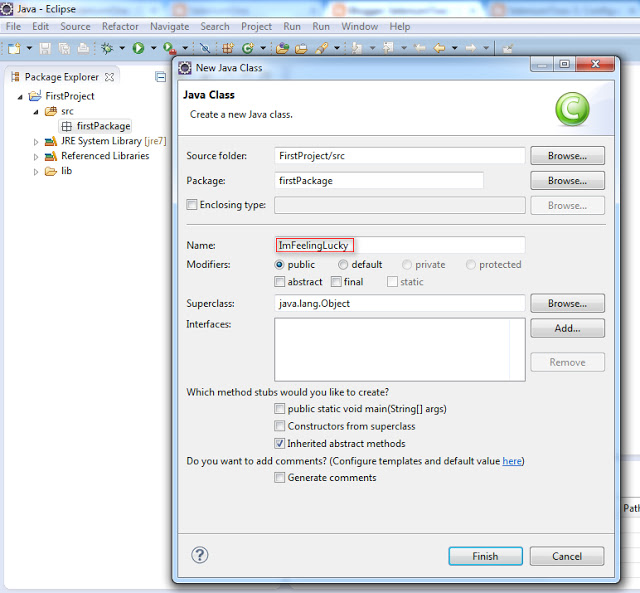 3. Ensure that the New Class file named as “ImFeelingLucky’ got added under the “firstPackage” as shown below: 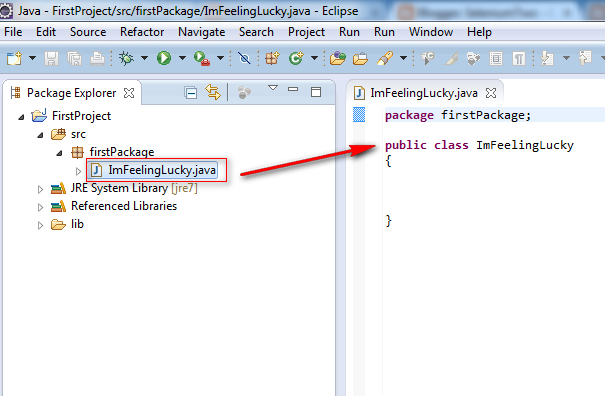 5. Paste the source code without removing the existing code in the newly created class file as shown below: 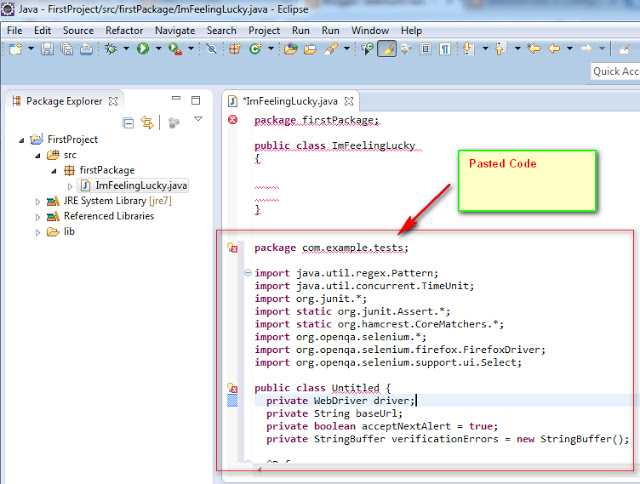 6. Ensure that few Eclipse Errors got displayed after pasting the source code as shown below: 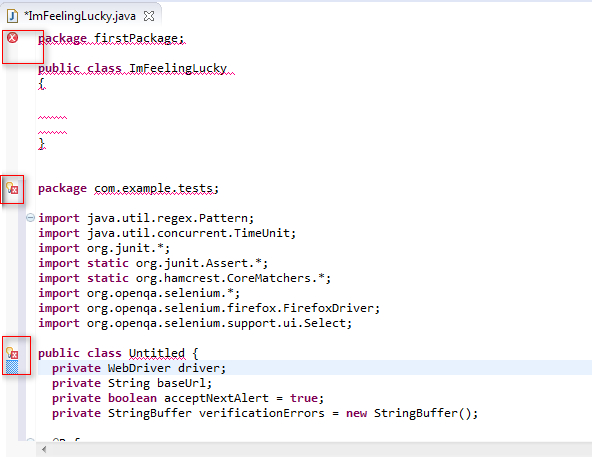 1. As only one package declaration is allowed in a class, but after copying the source code there are now two packages as shown below: 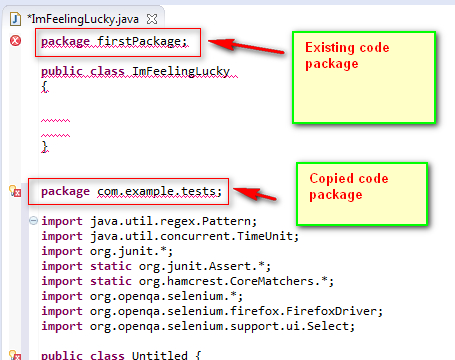 2. As ‘Copied code’s package’ is not available in the Eclipse IDE, lets remove or comment it to resolve this error as shown below: 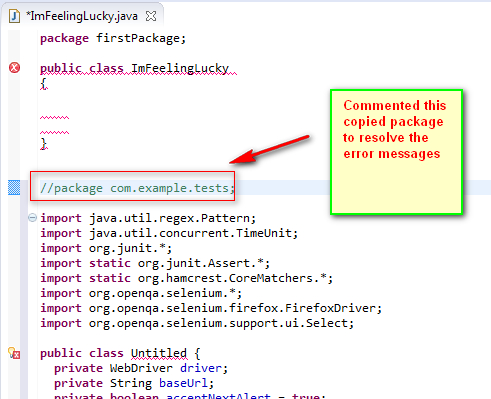 1. A single Class File can have only one Class declared inside it, but after copying the source code there are now two class declarations with different names as shown below: 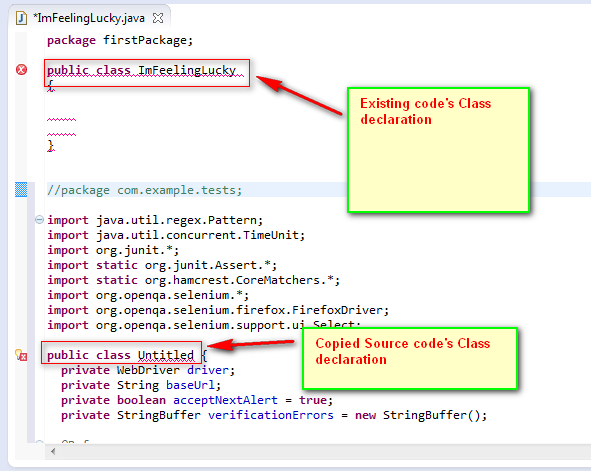 2. Remove or Comment  the existing class declaration as it doesn’t contain any code or we are not going to write any code into it (as shown below): 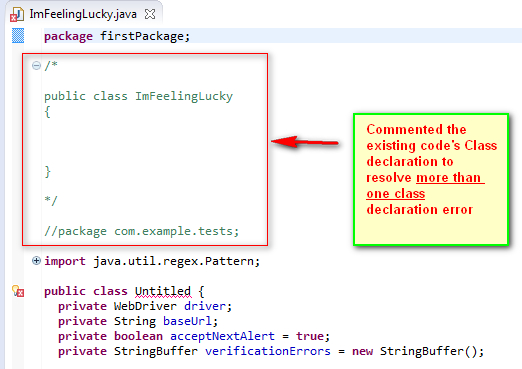 1. Observe that the Class file name is different from the Class declaration name as shown below: 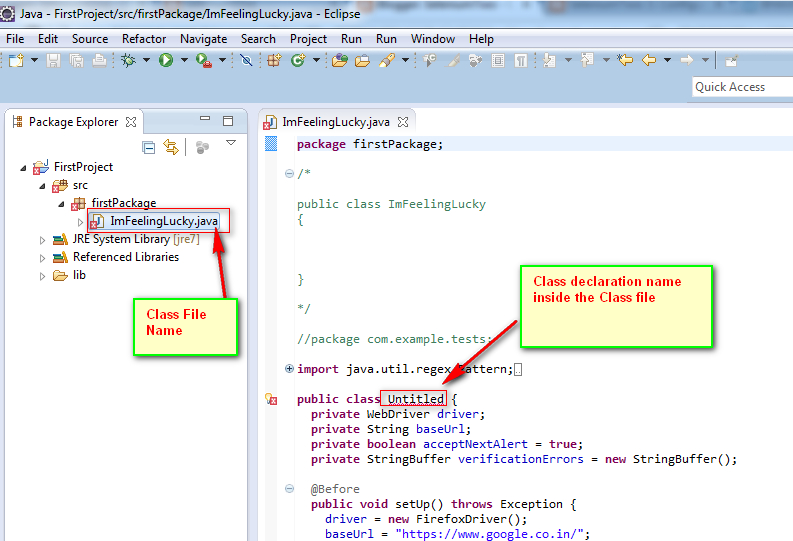 2. Change the Class declaration name as Class File Name as shown below: 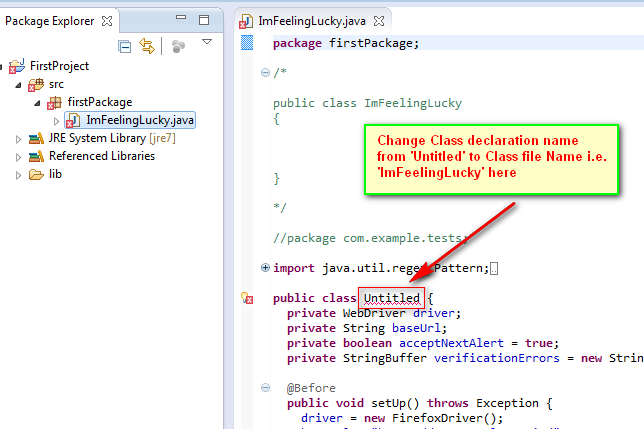 3. Ensure that all the errors got resolved and no other errors exist in the source code.

1. Observe that there are three warning message highlighted in yellow color icon as shown below: 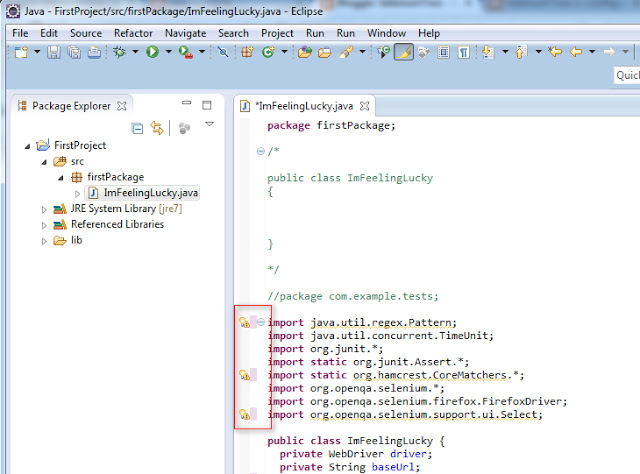 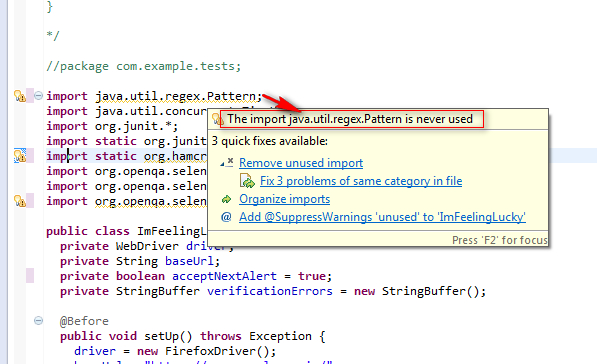 3. Remove or comment these import statements to resolve (as shown below): 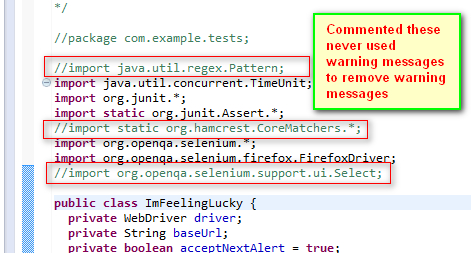 4. Ensure that the warning messages with the import statements got resolved now.

5. Observe that there are two methods that are throwing warning messages as they are never used locally as shown below:

6. Comment these methods to resolve the warning messages as shown below: 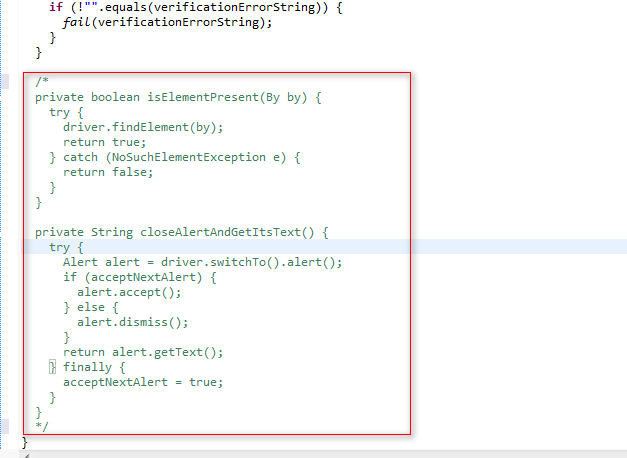 7. After commenting the above two methods, observe that there is one more warning message displayed as shown below: 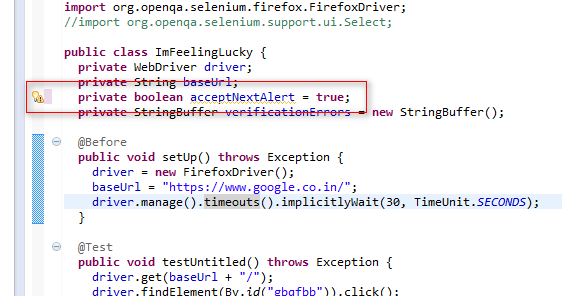 8. Comment the above displayed warning message to resolve it as shown below: 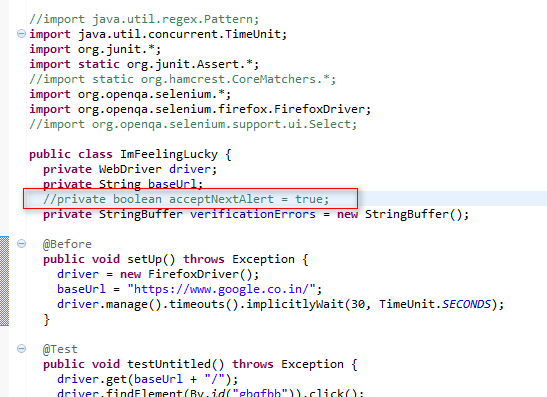 9. Now ensure that there are no more warning messages and finally select ‘Save All’ button on the Eclipse IDE to save all the changes as shown below: 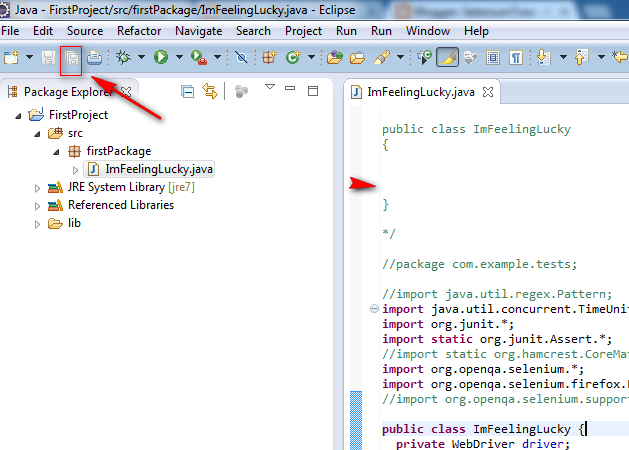 Remove the selenium command, so that after running the test, the selenium server won’t close the browser on which it runs the test 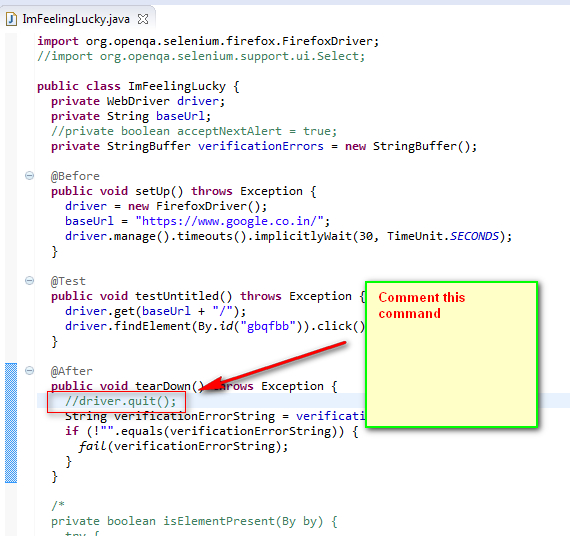 Before Running the created Selenium RC Test we’ve to verify whether a compatible Firefox Browser is installed on your machine.

2. Go to http://selenium.googlecode.com/git/java/CHANGELOG and start reading from the first line to find out the first occurrence of “Firefox Version Support” text

3. If the Firefox you have installed is supported by Selenium Webdriver you installed, then you may proceed to run the tests otherwise download a compatible Firefox in order to run the Selenium tests.

1. In Eclipse IDE, right click on the ‘ImFeelingLucky’ class and select ‘Run As’ -> ‘JUnit Test’ as shown below: 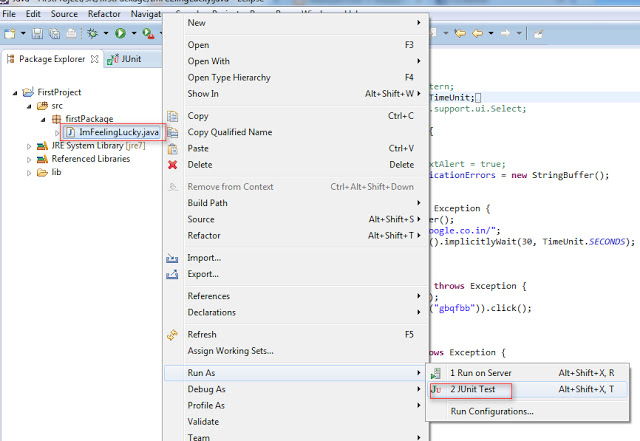 2. See how our automation test runs on Firefox Browser.

Check the Results after the test run is finished

3. Red color bar will be displayed instead of Green color bar if the test gets failed.

That’s it!! This is how we run the Selenium WebDriver tests in Eclipse IDE.