In the last chapter of Cucumber Reports  we got to know about the Plugins which are provided by Cucumber itself to generate various kind of reports like HTML, JSON, XML etc. Although those reports are enough to give you the overall execution results with detailed time logs and other things. But there are many third-party plugins also available in the market, which helps you to produce awesome reports which has much more capability to produce test logs and better visual graphics.

One of such plugin is Extent Report by our dearest friend Anshoo Arora. This is one of the best reporting plugin I have ever came across. I used in my past projects and always felt proud to demonstrate it to my team. This report fits fine with any test framework you use. With Cucumber as well it works fine but it requires to have some hecks to produce reports which even provide you details around the test steps as well. It would have been easy if, Cucumber would also have annotations like @beforeScenario & @beforeFeature.  These annotations are available in SpecFLow which is Cucumber in C#.

But there is another alternative called Cucumber Extent Reporter.

This is really simple, as we have been using Maven Project, all we need to do is to add the dependencies in to the project POM file. Dependencies information can be taken from Maven Repository – Cucumber Extent Reporter.

Note: If you are using Java 8+, in that case, it is required to add the dependency of ExtentReport v3.0.6+ as well.

Dependencies information can be taken from Maven Repository – Extent Report.

Note: Make sure to add these dependencies under <dependencies>Add here</dependencies> tag. Also after adding dependencies, always do Maven >> Update Project by Right Click on Project.

Extent Config is required by the Cucumber Extent Report plugin to read the report configuration. As it gives the capability to set many useful settings to the report from the XML configuration file.

1. Create a New File and name it as extent-config.xml by right click on the configs folder in the project. In this config file you can set many elements like :

1. Make an entry for the Path of the config in the Configuration.properties file.

Note: Make sure to edit the path as per your machine path.

2. Write a method getReportConfigPath() in the ConfigFileReader class to return the extent report config file path.

1. Modify the runner class and add the com.cucumber.listener.ExtentCucumberFormatter:output/report.html as a plugin followed by the report file as input. This should be done within the @CucumberOptions annotation.

The above setup will generate the report in the output directory with the name of the report.html.

Add a method writeExtentReport() in the TestRunner class to write the report.

This will load the extent configurations from extent-config XML and write the report in the desired path.

Now we are all set to run the Cucumber test. Right Click on TestRunner class and Click Run As  >> JUnit Test. Cucumber will run the script the same way it runs in Selenium WebDriver and the result will be shown in the left hand side project explorer window in JUnit tab.

You may find the report at C:\ToolsQA\CucumberFramework\target\cucumber-reports folder 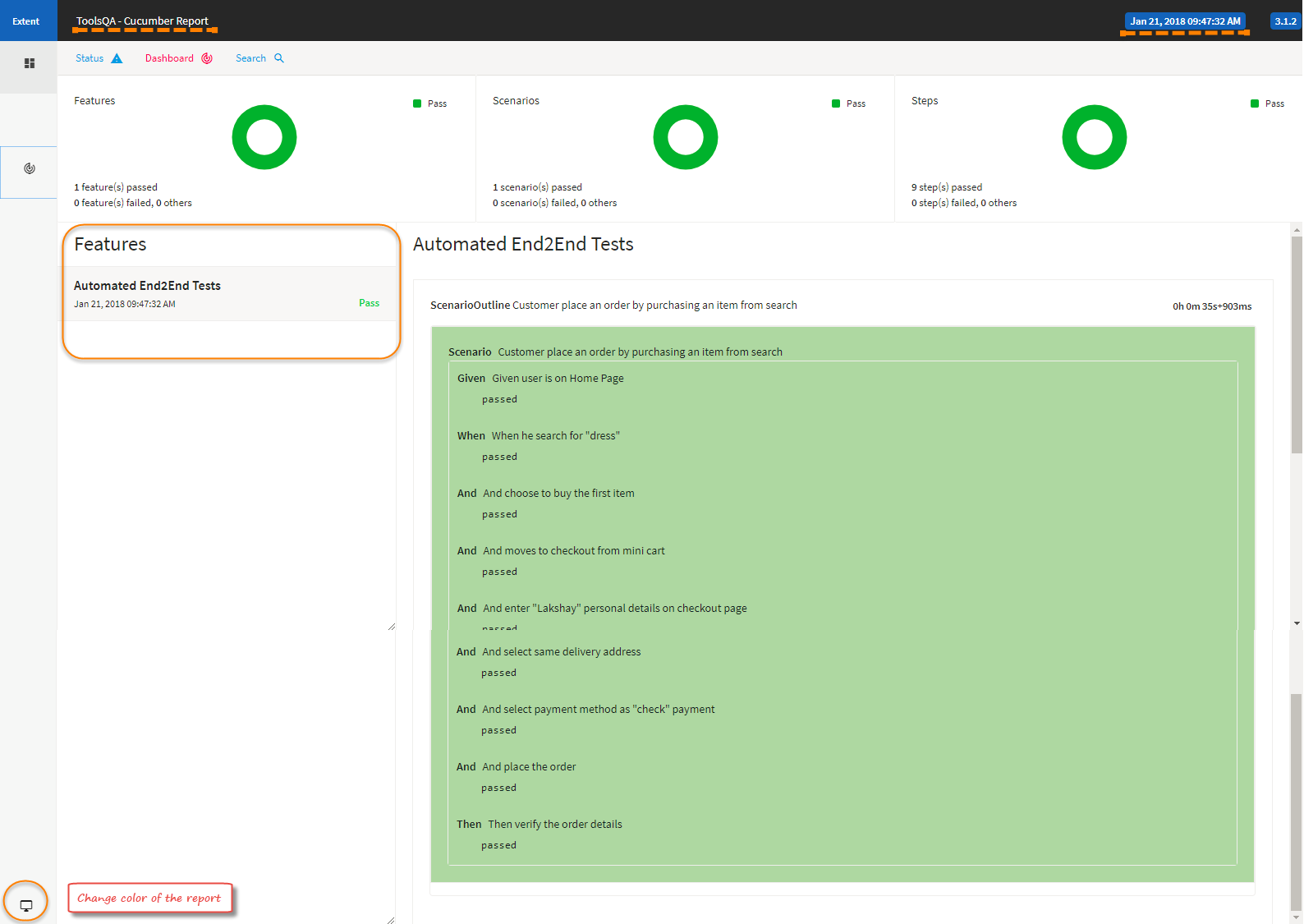 As I mentioned above, this report provides nice features to make report impressive. Let’s go one by one.

This gives you nice feature to set multiple System properties to the report, so that you know under which system configurations your test suite was executed and when. To set this just make use of Reporter class and access its static method setSystemInfo() and pass it your information like below.

Assign the Author to Test Scenarios

This gives you capability to assign Author of the tests. If the tests are written by different people, you can tag these tests accordingly. To set this just make use of Reporter class and access its static method assignAuthor() and pass it your information like below.

But as it has to be done before the Scenario actually starts executing, Add a new method in Hooks class using cucumber.api.java.Before like below:

Or if you know what all scenarios are written by whom, you can create a logic around like this:

Or specify multiple Authors at once.

Add Logging to your Reports

User can add logs at any step and those logs will be captured and attached to the corresponding step. The log should be added as follows:

In case any log to be added at the scenario level, the following can be done:

It’s a static class, so feel free to use this Reporter class to anywhere in the project.

This feature is my favorite as it gives you the capability to embedded the screenshot in the report itself using Reporter class: Reporter.addScreenCaptureFromPath(screenshotPath)

Below you will find the complete code to capture a screenshot and attach the same to the report, only if the scenario is Fail. In case of Pass, no screenshot would be taken.

Note:  @After(Order = 1) will run before the @After(Order = 0), as screenshot needs the driver object. So driver should be closed after taking screenshot. For better understanding on Hooks, please visit Cucumber Tags, Cucumber Hooks, Tagged Hooks, Execution Order of Hooks & Background Keyword.

Note: Also make sure to create a folder ‘screenshots’ with in the cucumber-report folder before running the test.

Now to explicitly fail your scenario, just make a small change to the Assert statement in the method verify_the_order_details() of class ConfirmationPageSteps{}

or you can also add message to Asserts, that will display in case of failure only:

This will save the screenshot at below location:

Report will be saved at the below location: 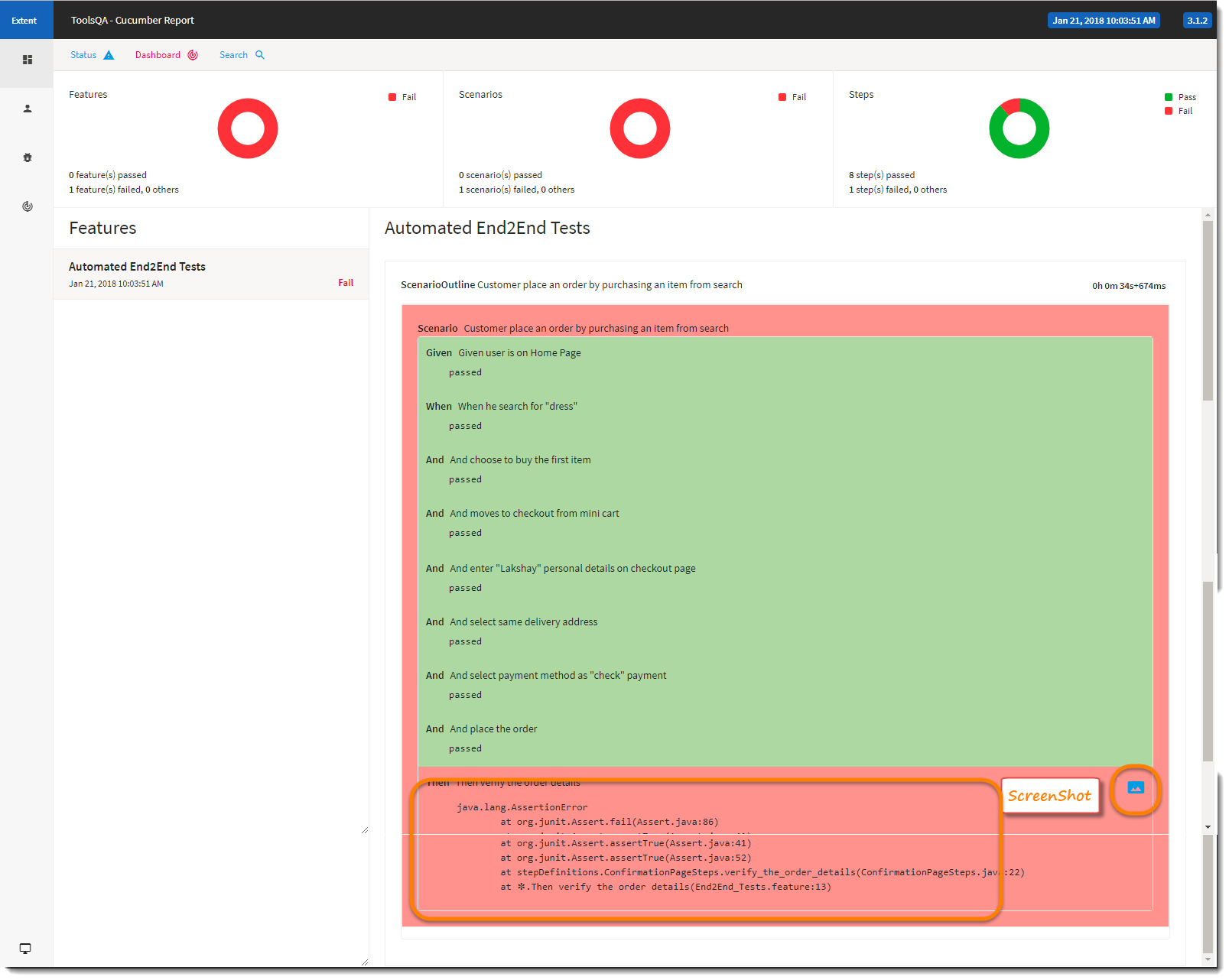 Note: You can see an small icon at the bottom the scenario, this is for Screenshot. Just click on it and it will open the screenshot with in the report itself.

The current state of the Project Explorer.