Things work absolutely fine till the time we run every feature and all the scenarios under it as all together. But what if you do not want to run all the scenarios together and like to run a few selected scenarios from different feature files together. In this chapter we will be covering the following:

What are Cucumber Tags?

Let’s say you have got many different feature files that cover all the different functionality of the application. Now there can be a certain situation in the project where you like to execute just a SmokeTests or End2EndTests or may be RegressionTests. One approach is that you start creating new feature files with the name of the type like SmokeTests.features or End2EndTests.feature and copy-paste your existing tests in the same. But this would make the project filthy and would require more maintenance in future. So how to manage execution in such cases?

For this, Cucumber has already provided a way to organize your scenario execution by using tags in feature file. We can define each scenario with a useful tag. Later, in the runner file, we can decide which specific tag (and so as the scenario(s)) we want Cucumber to execute. Tag starts with “@”. After “@” you can have any relevant text to define your tag like @SmokeTests just above the scenarios you like to mark. Then to target these tagged scenarios just specify the tags names in the CucumberOptions as tags = {“@SmokeTests”}.

Tagging not just specifically works with Scenarios, it also works with Features. Means you can also tag your features files. Any tag that exists on a Feature will be inherited by Scenario, Scenario Outline or Examples.

How to run Cucumber Tests in Groups using Cucumber Tags?

Let’s understand this with an example. Below is an excel sheet containing a list of scenarios of a single feature. 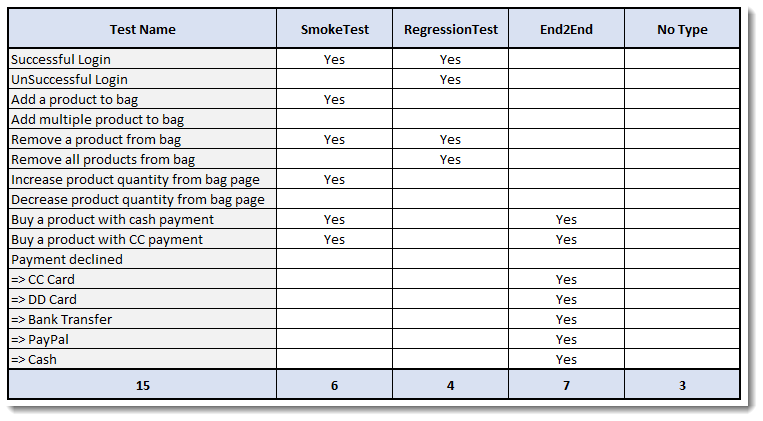 Execute all tests tagged as @SmokeTests

Note: In the excel sheet and in the feature file paste above if you count the scenarios which are tagged as @SmokeTests, you will find the count is 6 and the same count is also displayed under Junit tab.

Execute all tests tagged as @End2End

Note: A special thing to note here is that, the last scenario Payment declined has five different data examples. So every example is considered as a separate test. Due to which the total test number is 7.

Execute all tests of a Feature tagged as @FunctionalTest : Feature Tagging

Not only tags work with Scenario, tags work with Feature Files as well. Feature files pasted above is also tagged as @FunctionTests. Let’s just see how to executes all the tests in this feature.

Note: All the test exists in the feature file are executed.

Tags that are comma-separated are ORed.

Note: OR means scenarios that are tagged either as @SmokeTest OR @RegressionTest.

Tags which are passed in separate quotes are ANDed

Note: There are only two scenarios in our feature file which have both tags together.

How to Ignore Cucumber Tests

This is again a good feature of Cucumber Tags that you can even skip tests in the group execution. Special Character ~ is used to skip the tags. This also works both for Scenarios and Features. And this can also works in conjunction with AND or OR.

Note: This is AND condition, which means all the scenarios tagged as @FunctionalTest but not @SmokeTest. So total tests are 15 and smoke tests are 6, so it ran just 9 tests.

It is fun to play with tags, especially when you have many features files with multiple scenarios.