What is Defect Life Cycle?

Defect life cycle, also known as Bug Life cycle is the journey of a defect cycle, which a defect goes through during its lifetime. It varies from organization to organization and also from project to project as it is governed by the software testing process and also depends upon the tools used. 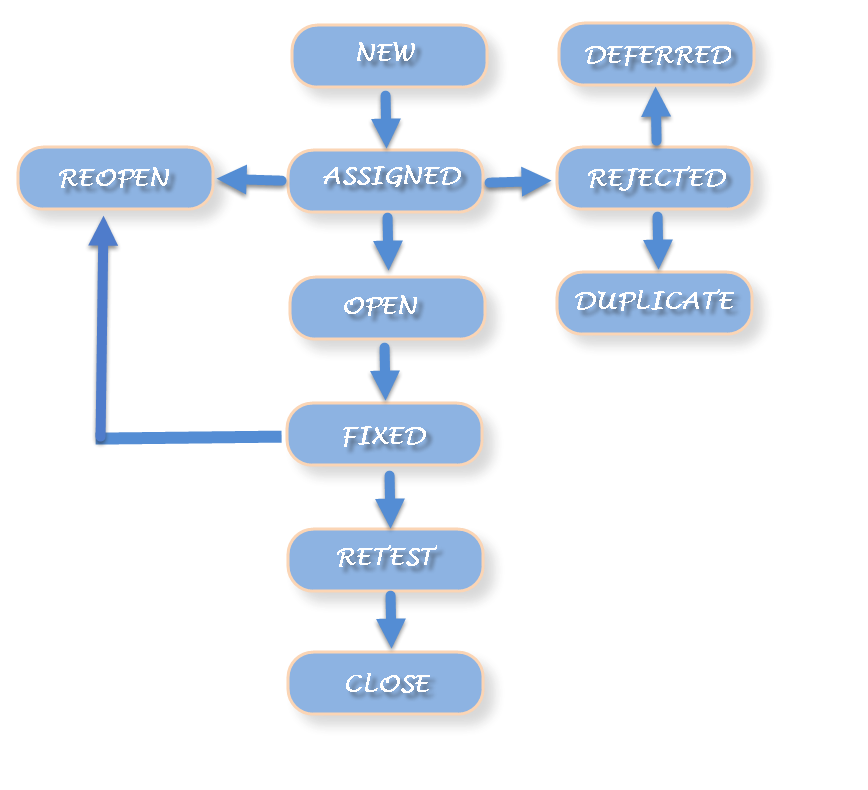 New: When a defect is logged and posted for the first time. Its state is given as new.

Open: Its state when the developer starts analyzing and working on the defect fix.

Fixed: When developer makes necessary code changes and verifies the changes then he/she can make bug status as ‘Fixed’. This is also an indication to the Dev Lead that the defects on Fixed status are the defect which will be available to tester to test in the coming build.

Retest: At this stage the tester do the retesting of the changed code which developer has given to him to check whether the defect got fixed or not.

Once the latest build is pushed to the environment, Dev lead move all the Fixed defects to Retest. It is an indication to the testing team that the defects are ready to test.

Reopened:  If the bug still exists even after the bug is fixed by the developer, the tester changes the status to “reopened”. The bug goes through the life cycle once again.

Deferred: The bug, changed to deferred state means the bug is expected to be fixed in next releases. The reasons for changing the bug to this state have many factors. Some of them are priority of the bug may be low, lack of time for the release or the bug may not have major effect on the software.

Rejected: If the developer feels that the bug is not genuine, developer rejects the bug. Then the state of the bug is changed to “rejected”.

Duplicate : If the bug is repeated twice or the two bugs mention the same concept of the bug, then the recent/latest bug status is changed to “duplicate“.

One of the most important skills that you need to have in your tester’s tool box is the ability to write a good bug reports. Finding defects is only part of the job, because if developers can’t reproduce the bugs you find, they’re going to have a very tough time fixing them. Your bug tracking software should include a number of mandatory fields to ensure that testers give a complete account of the defect they encountered. And testers should hone their descriptive skills.

Everything starts with a title. It must be clear and descriptive, so that you get an idea of what it is about at a glance.

Try to remain clear and concise in your description. Describing something accurately and concisely is a skill that develops with practice. Remember that the person reading your description has not seen the bug and try not to make assumptions.

You have to make it clear what you expected to happen and how the defect diverged from that expectation. This field helps to prevent any misunderstandings, and it gives the developer a clear idea of what went wrong.

Details about the project and version

It’s not unusual for testers to work on multiple projects at the same time, and sometimes they’ll share a database, so ensuring that your bug is listed in the correct project, and section within that project, is vital. You also need to get the software version right. Sometimes a bug will be fixed when a different defect is addressed, or simply by some change in the newest version of the software. If the version is wrong, developers may be embarking on a wild goose chase.

Any background information you can provide about your environment will help developers track that bug down. What device were you using? What operating system was it running? What model was it? What browser did you use? Every detail you can give about the platform will help.

These fields go hand-in-hand. A functional bug will generally be treated more seriously than a suggestion. Developers also need to know how severe the bug is. No product ships with zero defects, so having bugs categorized correctly in terms of type and severity really helps the decision-making process with regards to what gets fixed and what doesn’t. So it is always better to mention the Priority and Severity of the Bugs.

Steps to Reproduce (this is very important!)

You want to give a step-by-step account of exactly what you did to find any defect. Sometimes you can use software tools that catch your key strokes, or record screenshots or video files as you test, other times you will be writing from memory, so take notes as you go. Make sure that you test your own steps again before submitting the bug.

Give an indication of reproducibility as well. Sometimes you’ll be confident about your steps, but upon repeating them the bug won’t necessarily occur. If it happens every time, at random, or only once, then the developer needs to know that.

Supporting material is always gratefully received by those tasked with fixing defects. Usually this will be screenshots, but it can include audio and video files. Keep in mind this is often what developers look at first, before reading the text you provided. If you can convey the issue in a single screenshot, you’re helping save precious time!

It can be a good idea to use descriptive tags that enable you to filter the database and find groups of related bugs. Sometimes you’ll want to include another bug ID or a link within your defect report to something that you feel is strongly related or similar, but not similar enough to be a duplicate.

It’s usually going to be up to the lead developer or management to assign bugs, but on occasion you might receive instructions about who to assign to. Leaving unassigned or wrongly assigned bugs in the database is a dangerous thing because they can potentially slip through the cracks. Make sure you’re clear on the expectations for assigning.

Put it all together : Bring all of this together and you should have a good bug report. If you’re uncertain about the quality of your bug reports ask for feedback. A quick chat with the developers can really help you understand what they need.