I have got a baby niece. She completed a total of three years on this planet. To celebrate her existence, I decided to teach her about linked list. I decided to buy her four gifts(I am a generous aunt)

Now, I could’ve given her the gifts directly but I want to trouble her a little(C’mon, don’t get all judgy now. She has kept me up so many nights with her shrieks. Time to trouble her!)

So, I made a little game. I told her she will be given a bunch of clues and if she guesses it properly, she gets her gift(s).

Time For A Birthday Gift Hunt:

Her Dad. With all four gifts in her hand, the birthday gift hunt came to an end for her. But, with it, comes the beginning of an understanding of linked list for us.

Let me get you a formal definition and of course not-so-formal one where we unpack the jargon.

A linked list is a collection of multiple birthday presents where each present comes in two parts, one gift and a clue to get next gift.

Oh yeah, our above birthday gift hunt example was nothing less than a linked list. So, let’s unpack the jargon.

There’s something called a Node, which is the basic unit of the linked list.

You know what was a node in our above example?

So, each node is made up of up parts: 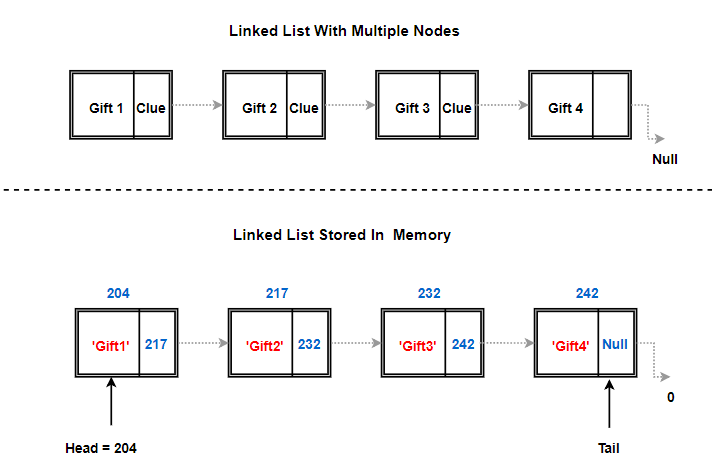 It’s All About Head Node:

So, the first node of the list is called as the head node, represented by 204 (Memory address) in the above image. It is a really important node for two main reasons:

Again, we repeat the same steps, we go to node residing at address 217 and ask it to share the memory address of the next node.

This goes on till we hit a node which doesn’t have any address stored in the next field (null in above case.). Or it might link to what’s called a Terminator or Sentinel node. A sentinel node is really just a dummy node, a dummy object, that doesn’t contain any element value. This empty node can be used to identify the end condition of the Linked list.

This just means we’ve reached the end of the list. The last node in the list with no address is known as the tail node.

(N.B: This is still ordered data. But, just has a specific sequence of nodes with data and link to the next node)

Bunch of nodes each storing data and address. Kind of work which our beloved array can do quite easily. Why bother studying linked list then?

Herein lies the major difference between a simple array and linked list. The way both these data structure are stored in the memory is very different.

While storing elements of an array — whatever they are, integers, strings, references of objects — always imagine them stored in a contiguous area of memory.

Meaning the elements are next to each other.

And thanks to this setup, no matter how large the array is, we can easily retrieve or jump to any position to see what’s stored there.

How? Did you guess it right? The Mighty indexes of arrays.

But, in data structure context, random access means we can get to any specific element directly without having to traverse backward and forwards through our entire collection.

The only operation which requires going through each and every single element in the array is a linear search. Except that, array supports direct access to the individual element. (Big O Complexity: O(1))

Like we discussed above, all linked list needs to know where our head node is stored in the memory. Head node can help us with addresses of other nodes easily.

So, nodes do not need to be located next to each other. They can be scattered anywhere in the memory.

But, we’ve kinda hit a wall. We have no concept of index numbers in Linked List. And top of it, we don’t even know how to reach nodes without asking the head node to tell us where the second node resides in the memory.

So no direct/random access here. Consulting head node and following all the next field to find element ‘Gift 3’ is known as sequential access.

So, from array’s O(1) complexity to retrieve element to linked list O(n) complexity. Also, if needed array too can perform the sequential access. All we have to do it put a for loop, look at each element.

Because, it makes addition and removal of elements from collection much, much easier as compared to an array.

Inserting Or Deleting An Item In Array:

We know arrays are stored in contiguous space in memory, now to insert a new element in position 2 requires all elements to be shuffled around. Same goes if the element is deleted from any position. We need to maintain its meaningful index order. But reshuffling the items can be very demanding.

The below class Node — a nonpublic class — stores a node of linked list. Like we know, it is made up of two parts :

Back to our birthday gift example. Now instead of four gifts, I decided to give her only three gifts by excluding gift given by myself. Since I was the head node, before we get rid of it, we need to make next node as head node(Head node is the entry point which knows about the entire list. We need a head node no matter what) 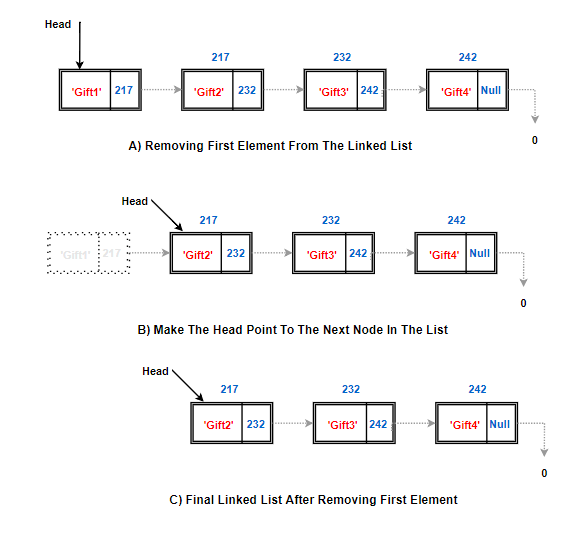 Adding A Node At The Beginning: 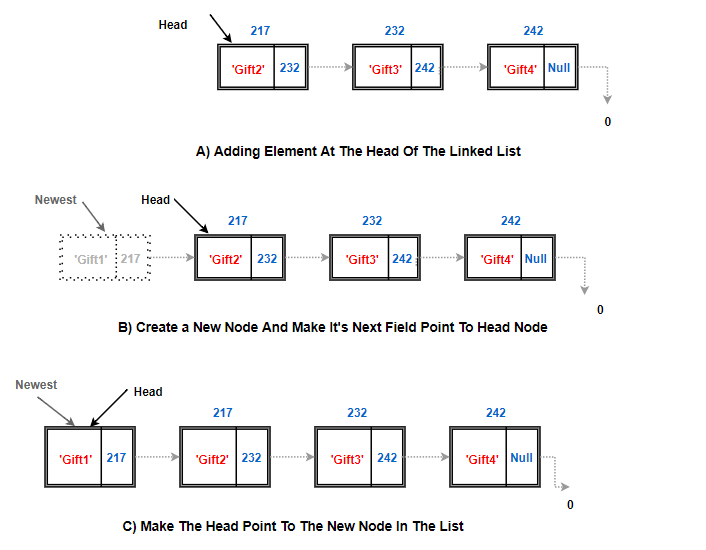 Okay, one last one. I promise.

Adding A Node At The End:

Time to add one more present after Gift 4. The last node of the linked list is known as the tail node and usually has a tail reference/pointer like head node. 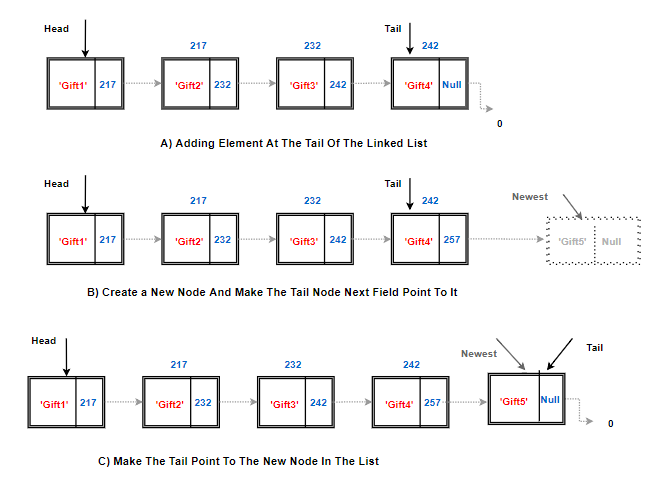 Similarly, removing a node from the end will be O(1) operation. Everything still follows a sequence, no nodes need to be changed or shuffled around.

Now, imagine, even if we had a very large data, adding elements to a linked list always takes the same amount of time whether the list is small or large.

Something, which our array becomes inefficient at when the array is dealing with lots of data.

So, the array is extremely efficient at direct indexing(read/write) but bad at removing and adding elements.

The specific idea of a linked list which we discussed above so far is called a singly linked list.

Back to our birthday gift example, let’s say I don’t want to give her gift no 3, one which her mother gives her.

Delete Node From the Center:

We will have to follow below steps to delete a node from the center:

Simple. So, you reached Node 3. Time to delete it and make Node 2 next field point to Node 4.

But, Houston, we’ve got a problem.

Works just like the single linked list but just with one extra superpower: Power to visit the past node.

How is it done?

Simply, by storing one additional piece of information for each node.

So, here the Node contains: 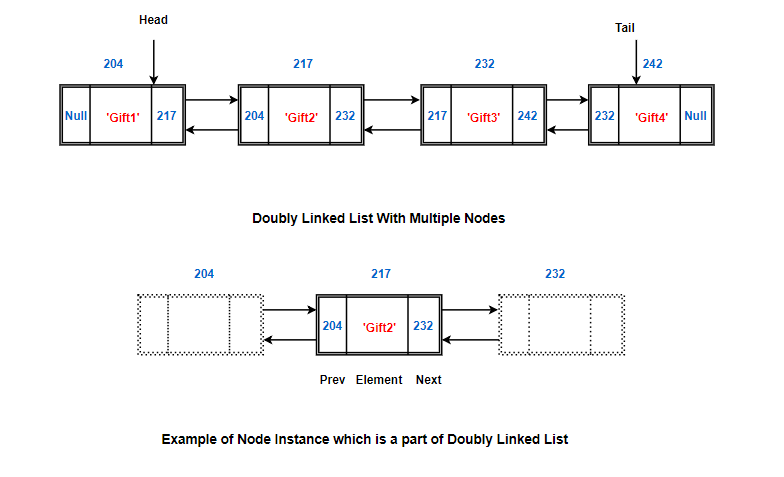 Nothing else is different. Just like the singly linked list, these nodes can be located anywhere in the memory. But each node has two references. A reference to the next node and a reference to the previous node.

Coming back to our removing node from center example, since doubly linked list allows us to go forward and backward, we can easily access node no 2 and make its next field point to Node 4.

So, thanks to the doubly linked list, along with adding and removing at head or tail node, we can easily insert/remove elements from center too.

Now, with the doubly linked list, we do the same thing with the previous link of head node too. So, it either stores null or points to the sentinel or terminator.

Just like doubly or single linked list, just with one difference. Here, rather than these starting and finishing node(head & tail) pointing to a terminator, the tail node points back to the first node & head node references the final node.

It’s not typical, but it can be useful for certain problems. But if we get to the end of the list and say next, we just start again at the beginning.

Basically, we go in a cycle/loop. If we follow the tail node next field, we will get the head node. Round robin scheduler can be implemented using circular linked list and the queue data structure.

So, to summarize, let’s see the performance of various operations on the singly-linked list and doubly linked list.

There are several operations performed on the linked list and the names can sometimes be different in various environments and libraries. But normally the operations provided below cover most of them.

But, We know how to make popping the element at the end and adding before cheap.

Yes, you guessed it right. We can do it by using doubly linked list. Thanks to the prev pointer, we can easily track the previous node.

So, to remove the last element, all we have to do it, go to the last node, check its prev field and move the tail pointer to the node address present in prev field.