Native, Hybrid And Web Apps and their Differences

A native mobile app is installed on the device and is accessed through the icons on your smartphone or tablet. Native apps are directly downloadable from the App store of the respective device operating system. These apps are developed for a single platform-version and take advantage of the features of the host device. Once gained permission from the user they can work their way through host of different features including GPS, camera, messages, gestures, contacts, mic, calls, etc. They are also able to use the notification system of the device. Although the most prominent feature of the native app is that they are not dependent upon any other external connection to perform. Native apps don’t require network connectivity for their functioning. The utilities inbuilt device properties to perform the required task. For example, camera app, certain games, etc.

Mobile web apps are applications that behave similar to the native applications but are not actually an application. These apps are mostly websites that have been optimized to have look and feel of a native application. They run on a browser and are mostly written using HTML5, JavaScript or CSS. Web applications are accessed in similar way as a website. The user enters URL and navigates to the webpage. User can directly add it as a bookmark in his browser. Web apps have become quite popular after the introduction of HTML5. Developers realized that HTML5 offered the resources that helped them to obtain a native app-like functionality within the framework of a browser.

There are many features in the web apps that have made it quite indistinguishable from the native apps like invisible browser bars and buttons, and usage of the swipe gesture to move forward and backwards. Other than these available features, it also offers GPS, tap to call and there is also a camera API. But there are still features that are not yet available with the web apps like background notification, accelerometer and complex gestures.

These applications are built using multiple platforms. Hybrid apps are a part native part web application. Similar to the native apps, hybrid apps are downloadable from the app store. Similarly these apps also take advantage of the device functionalities. Similar to the web apps, hybrid apps also rely on the browser for the rendering of the HTML. The thing that makes it different from the web app is that the browser is embedded inside the app.

Hybrid apps are often built by companies as a wrapper to an available webpage. This allows them to have a quick presence at the app store without spending a significant amount of time and money in the development of a native app. Hybrid apps are also quite popular as they work with different platforms and thus reduces the development and testing costs. The same code can be used on different OS without requiring any significant changes.

Hybrid apps bring the best of both worlds like they are platform independent and easy to develop. A single code for all platform also ensures low maintenance and regular updates. These apps are also used with some popular device APIs.

Hybrid apps also have their own set of limitations; like a loss in performance and optimization when compared to the native apps. They may also face some design issues. These are basically due to its inability to render same visual appeal across different devices with different hardware/software configurations.

Lets have a look at the differences between Native, Hybrid and Web apps 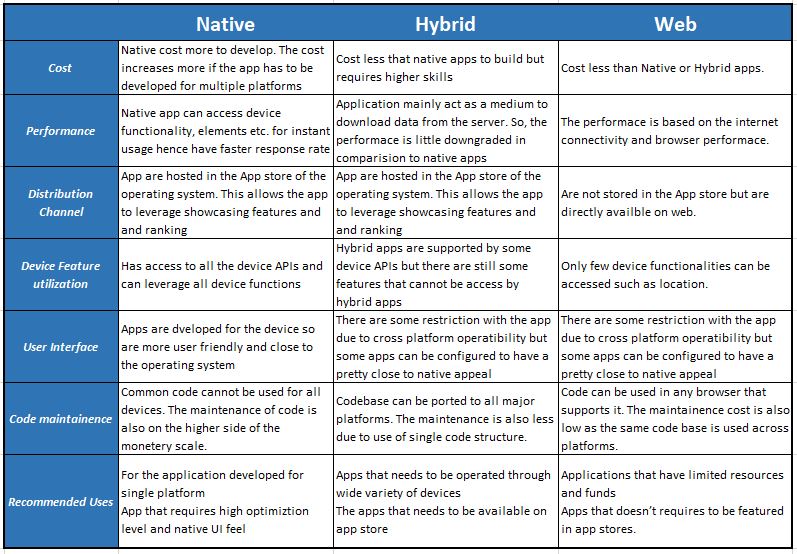