Software Testing is process of Verification and Validation to check whether software application under test is working as expected. The intent is to find the defects in the code and to improve the quality of software application. To test the application we need to give some input and check if the results are as per mentioned in the requirements or not. Testing of application can be carried out in two different ways, Positive testing and Negative testing.

Positive Testing is testing process where the system is validated against the valid input data. In this testing, tester always check for only valid set of values and check if a application behaves as expected with its expected inputs. The main intention of this testing is to check whether software application does that what it is supposed to do. Positive Testing always tries to prove that a given product and project always meets the requirements and specifications. Positive testing is testing of the normal day to day life scenarios and to check the expected behavior of application. 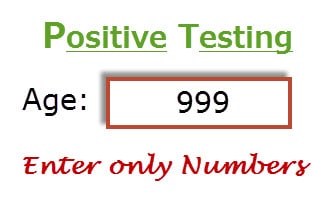 Most of the applications developers implement Positive scenarios where testers get less defects count around positive testing.

Negative Testing, commonly referred to as error path testing or failure testing is done to ensure the stability of the application. Negative testing is the process of applying as much creativity as possible and validating the application against invalid data
In Negative Testing the system is validated by providing invalid data as input. A negative test checks if an application behaves as expected with its negative inputs. This is to test the application that does not do anything that it is not supposed to do so. Such testing is to be carried out keeping negative point of view & only execute the test cases for only invalid set of input data.

Here, expectation is that the text box will not accept invalid values and will display an error message for the wrong entry.

Difference Between Positive and Negative Testing 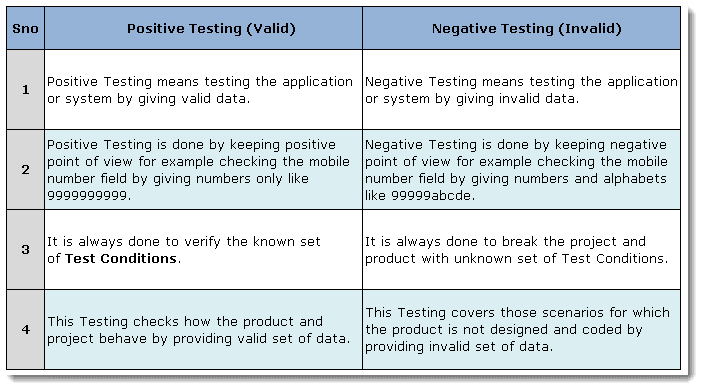