You are here:
Selenium C-Sharp

What is switch command?

Webdriver library contains a set of classes and methods that help us to communicate with the web browser. In most of testing scenarios we find element on the website and then click it in case of buttons or fill the text in case of text boxes. Often it’s enough when you begin to automate your tests in the web browser.

However, at some point you may get stuck discovering that you’re not able to find the element on the page. The first thing that you should ask yourself is: Maybe my application opened a new popup window and the element that I’m trying to find is placed in this new window? If your answer is “YES” – remember one thing:

The new popup window(or new tab) shows another HTML page that opens in a new context, so you should switch context to the new window first and then you can communicate with the new window. This is exactly what switch command comes into play.

There is a set of methods accessible in the webdriver API. We could use a Visual Studio functionality called intellisense. Intellisense shows all possible methods:

Let’s examine the following methods quickly. We’ll cover some of them in the examples so that you can easily copy code fragments and run in your Visual Studio.

Now let’s see the way to find a list of windows that webdriver can interact with. Such set of windows is called windows handles. Each window handle is identified by random string, which is different on each test run.

Each of the tests in this article should be preceded by special method. Thanks to [TestInitialize] annotation the Setup() method is run before each test method in the class.

In the code snippet, you can see that we create a new instance of InternetExplorerDriver and maximize the window to see as much website content as possible. The demo page we are using is: http://original.toolsqa.com/automation-practice-switch-windows/

We can distinguish 3 handle types, We’ll cover each of them in the below examples:

How to handle Alert in Selenium using C#?

Alert is a popup window that can be shown by running javascript alert() method. The website that we’re testing makes use of alert(). The result is presented in the following picture:

Before we start, we need to be aware that there are various test frameworks that we can use. In the world of .NET, the most popular frameworks are NUnit and Visual Studio Testing tools. In the example, we used the latter because it’s a Visual Studio build-in tool so we don’t need to install additional NuGet packages. You can see How to Configure and Use NUnit Test Framework works.

The first step that we take is creating a new class with tests. 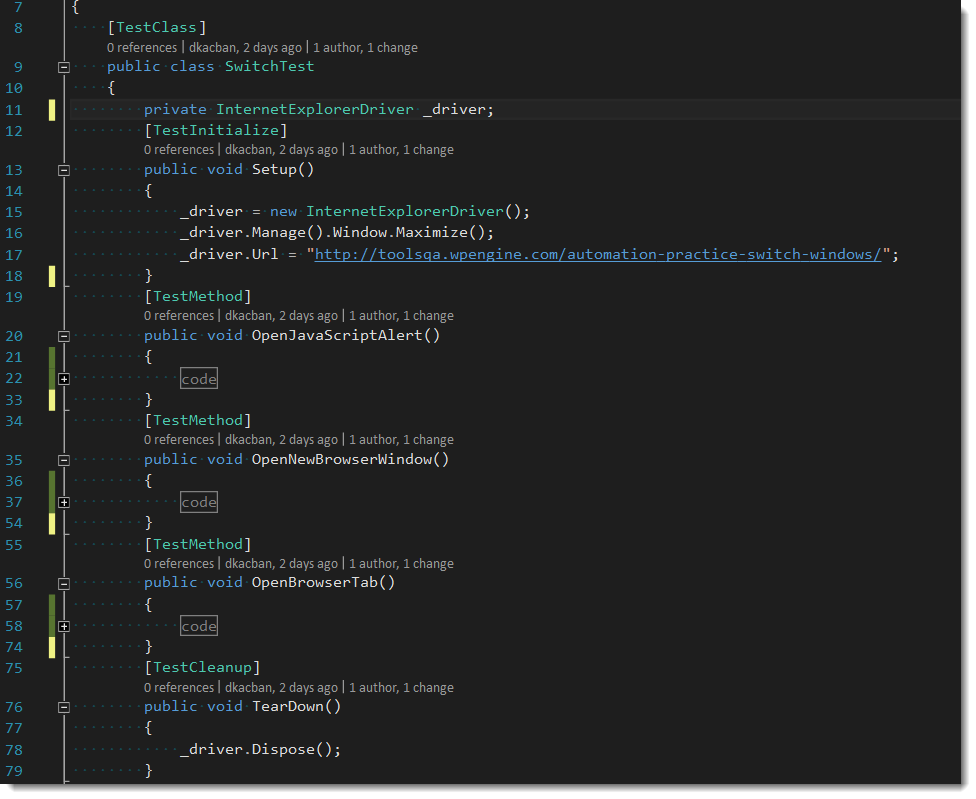 We need to create test method which looks like this:

How to handle Frame in Selenium using C#?

Some websites use frames to load fragments of the website. Most of the currently created websites avoid the frames. However, we still need to know how to switch to frame. The solution is really simple and it looks exactly like the above example with Alert. The only difference is that we use Frame method instead of Alert.

How to handle Window in Selenium using C#?

We can open a new window in javascript by running the window.open() method. On the website that we test after clicking a button the code that runs is similar to this: window.open(“www.toolsqa.com“);. When the web browser runs this code the new window opens. The web browser should show the following: 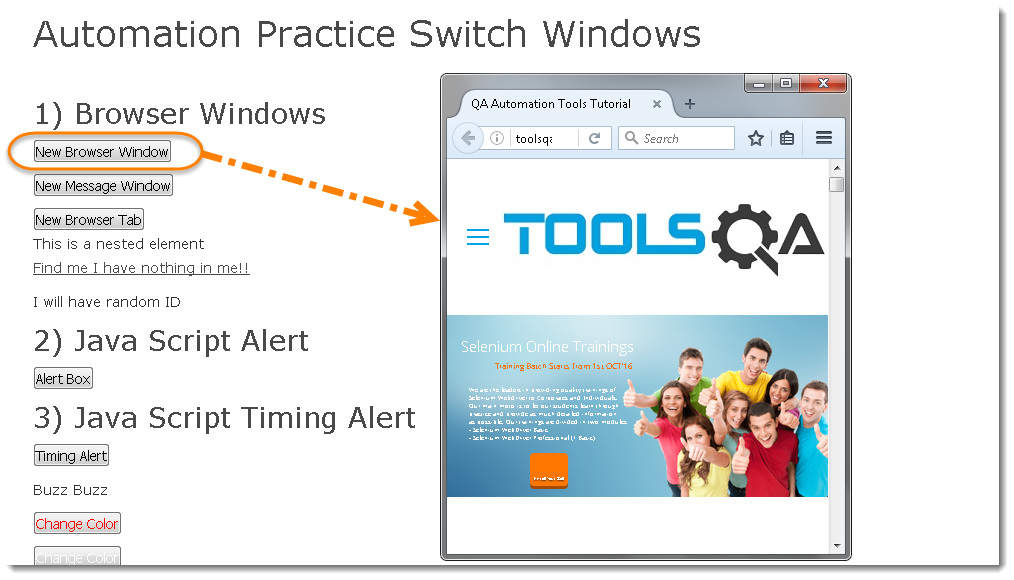 Now let’s create next test to automate the test:

How to handle a New Tab in Selenium using C#?

Now we know that we can open a URL in another window. But we can also open it in a new tab. Then a new tab in the browser is created and new window is not created.

Let’s look at the code:

The switch command is a useful tool that you’ll find useful in the cases:

Working visual studio solution can be downloaded from Bitbucket.

How to Handle Multiple Browsers in Selenium CSharp
February 4, 2017

How to Handle Alert And Popup Box in Selenium CSharp
February 4, 2017