Test automation is a growing market with a 19.2% CAGR. The revenues generated from test automation are expected to reach close to USD $50 billion by 2026. That’s more than twice as much as generated in the year 2021 which is around USD $20 billion. The reason behind its immense popularity is the process simplification done through test automation. As a tester, if test automation is removed from the equation all we are left with is repeated manual tasks (for each release or each sprint end) that are error-prone, hectic, and take so much of our valuable time that could easily be used in other tasks.

However, this is just a happy story about test automation. A little bitter part of this story is writing scripts that are perfect and help achieve a high test and code coverage through them. Along with it, test automation also suffers from budget issues and high-cost investments. If you are wondering the reasons behind it, this post is exactly what you are finding for. In this post, we take you around a brief overview of test automation pain points and their solutions. Later, we will try to eliminate those using testRigor.

Test automation is not a full-proof solution to automating tasks and achieving test cycles faster. It suffers from the following major complications:

The most concerning factor for an organization (especially the smaller ones) is the budget overflow. Running tight on cost constraints, each move they make has to be calculated in the financial direction as well. Automation engineers that would be hired and work on testing tools can disbalance this.

An automation engineer in the USA earns $110K on average. It can also extend up to 240K based on experience and other qualifications. Compare this to a manual tester that earns $49K on average in the USA. Also, with these investment costs, the returns are not expected immediately.

It all boils down to the number of test cases you run repeatedly that fetch you a breakeven point in the future. Sometimes, this even becomes the icebreaker when it comes to startups, semi-startups, and even MSMEs.

The next major issue comes with the programming language in which test scripts are required to be written. Here, we face two situations:

The final issue we face while adopting test automation is maintenance. A major part of our time and costs goes towards the maintenance work. If we find any bug in the system pre or post-production, we need to find it and rectify it as soon as possible.

The problem with scripted test automation is the time it takes to find the location of the bugs and rectify them. If it is a new hire, then understanding the code may take additional time.

The issues we discussed in the above section, if you observe, are not actually related to “automation testing” but to “process leading towards test automation”. As a team manager or project manager, I would be eager to introduce automation testing into the system. The system would work faster and more efficiently when it is under the automation watch. The only problem here is the vast investments

we have to make to get started. The framework, the language, the scripting, and so on. A solution to this problem is adopting a cloud framework that eliminates all these issues – testRigor.

testRigor is a test automation tool available on the cloud that facilitates working on the actual testing process instead of working on the coding and debugging part. For example, if I choose to work on selenium, I might have to write a script something like this:

Here, installing Selenium and maintaining its libraries and dependencies is excluded. You can learn more about them in the Selenium tutorial.

In addition, you have to locate the ID of the element before entering it in the script. testRigor makes this process simpler by not only restricting it to a minimum number of lines but using English as the language of communication between the tool and the tester.

testRigor can perform the same actions using the following lines:

Here, we are not required to locate the element through source code, etc. The tool automatically detects the elements through its label. But more on that later.

Since test automation is an extremely wide subject with its wings expanding to almost every type of automation task, it is obvious to think if your niche is supported by the tool you are investing your time in. testRigor supports the following types of test automation methodologies over the cloud:

The foremost benefit of using testRigor is the language it uses for test case creation which is English. The development of a product is a combined effort from many different teams in an organization. With the old way of writing test automation, only a few technical persons can review and write test scripts since they are written in a programming language. This creates a communication gap between the team members. For example, if a business analyst wants to check a few client requirements through test cases, he may have to sit down with a tester. However, other tasks can use this time usefully.

Contrary to that approach, a simple test case written in testRigor may look as follows: 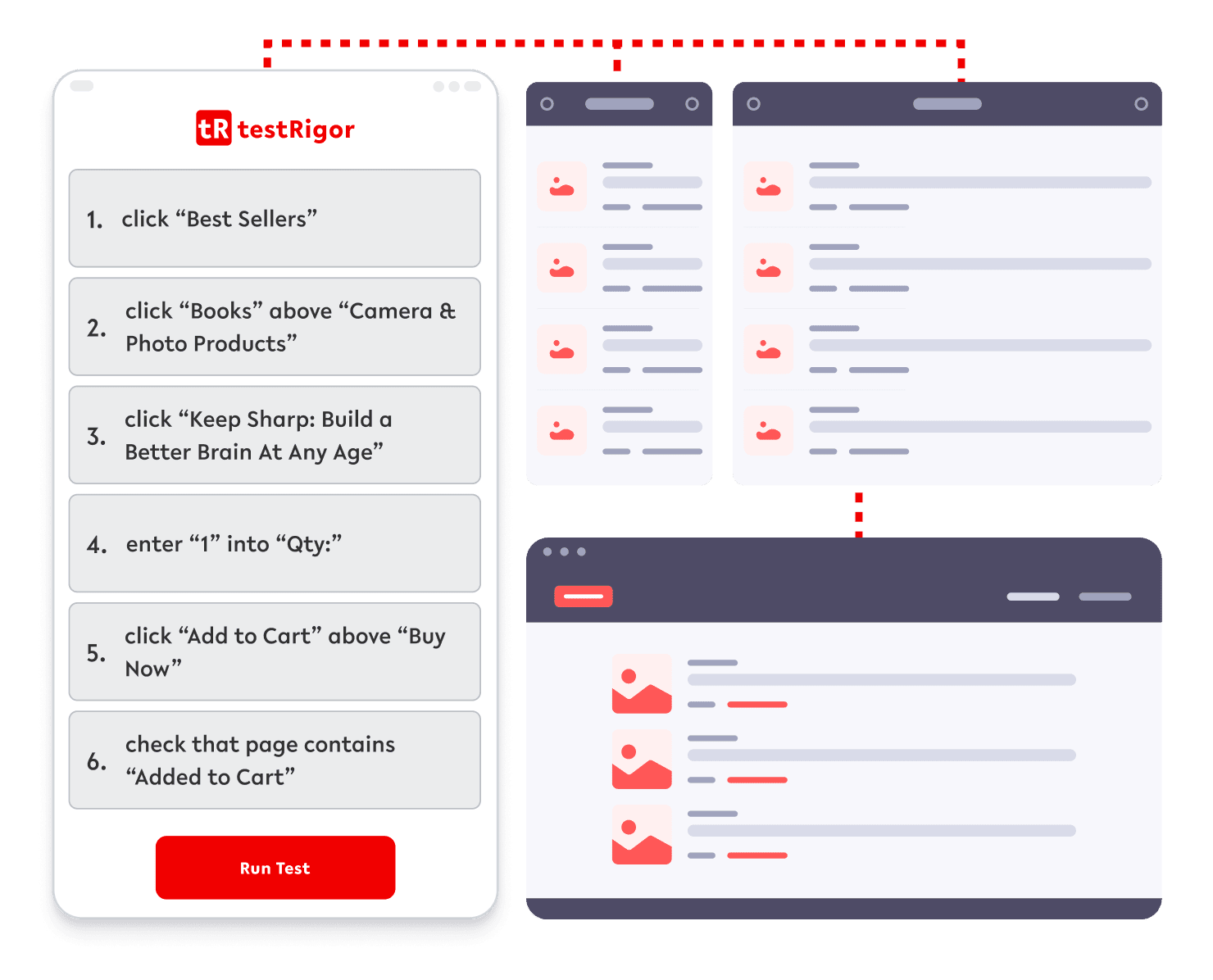 A direct advantage of using the English language for creating test cases is that anyone can create them and execute them on the platform. Hence, we do not need expensive automation engineers but just someone with a keen eye for testing. Hence, manual testers can also perform automation with the same efficiency. This saves salary and training costs.

English-based test cases are easier to maintain since debugging becomes easier than scripted testing. Additionally, testRigor provides multiple mechanisms that simplify test maintenance dramatically, saving many hours. A direct result of this is a reduction in maintenance costs which is a major factor in our expenditure sheets.

The user interface of an application is a dynamic element. It keeps on changing with trends, user feedback, and other research. But whenever a UI element changes, the tests related to it in the automation stack need to change too. In addition to the direct calls, the dependencies among the test cases also require alteration. When this repeats in each version, it becomes a time-consuming task.

testRigor’s AI-based intelligent test automation can detect the user interface changes automatically. It uses as many as 10 signals to match the UI elements with the test cases. Therefore, it can identify the changes, and the need to change the test cases repeatedly is eliminated.

The above-mentioned points affect the test automation time in test creation as well as execution. testRigor has specifically calculated the time on different parameters such as execution speed, setup time, test creation time, etc. The following table demonstrates the same parameters with metrics:

The companies adopting the platform ensure these numbers through their testimonials. For instance, IDT corporation went to 91% of test automation using testRigor and claimed, “Ever since we started using testRigor my manual engineers feel empowered.”

testRigor claims that testers take 20x less time to create tests when they use testRigor for their test automation. They also strongly claim that as compared to Selenium, testers would spend 99.5% less time maintaining tests. All these statements make us eager to start testing the tool right away. Let’s check out how we can start our journey with testRigor in easy steps.

How to use testRigor for test automation?

To start using testRigor, we need to sign up on the platform. For practicing or just trying your hands on the test automation with the tool, you can choose the free plan for now.

Fill in the information to signup on the platform: 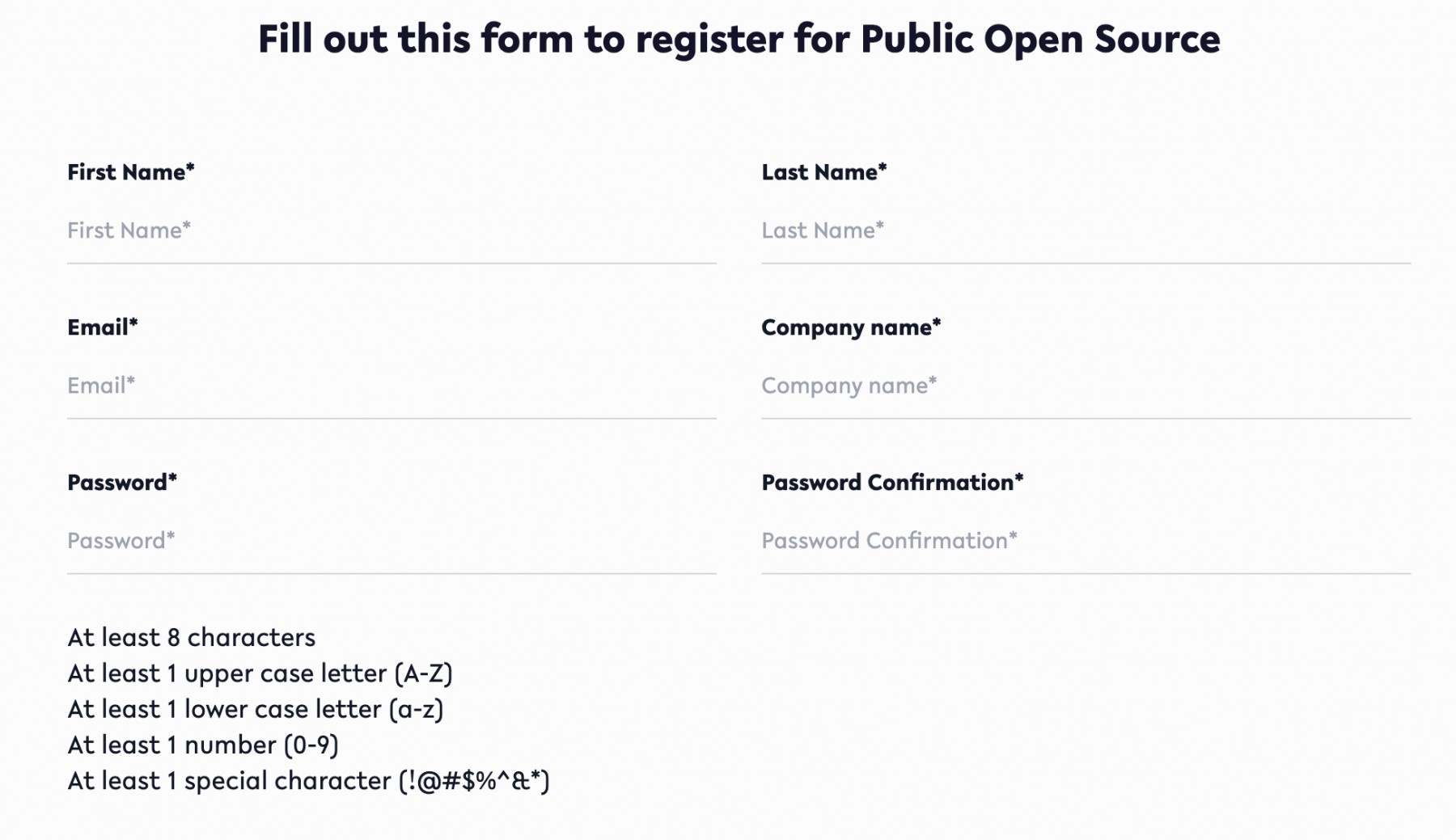 Your dashboard would look something like this after the login: 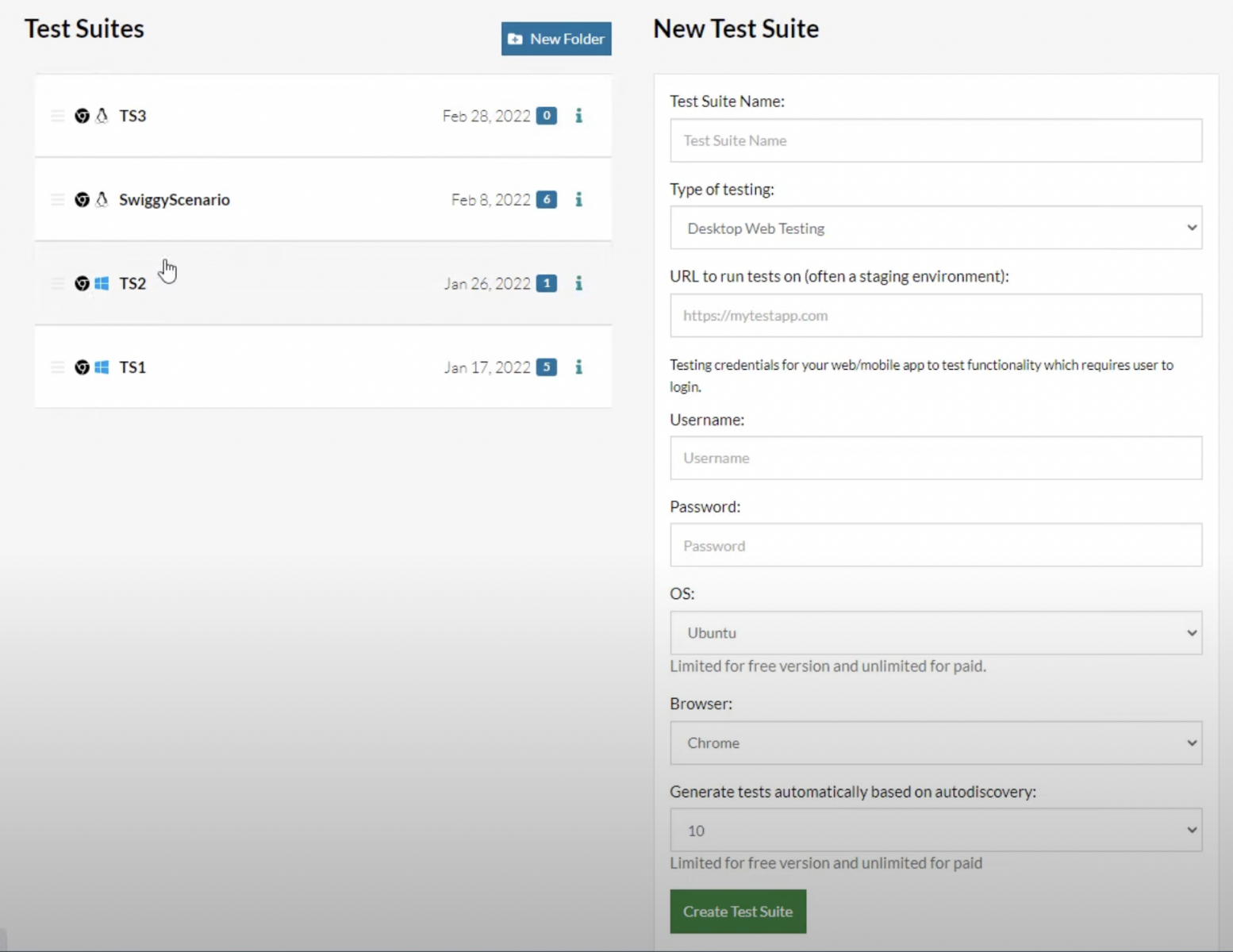 I have a few test suites on the left that have already been executed. For fresh sign-ups, the left side should be blank and you would be required to create a new test suite.

The required information in the above panel is simple and straightforward. If you want to explore advanced settings like Basic Authentication, you can click on the “Advanced Settings” link beside “Create Test Suite”. 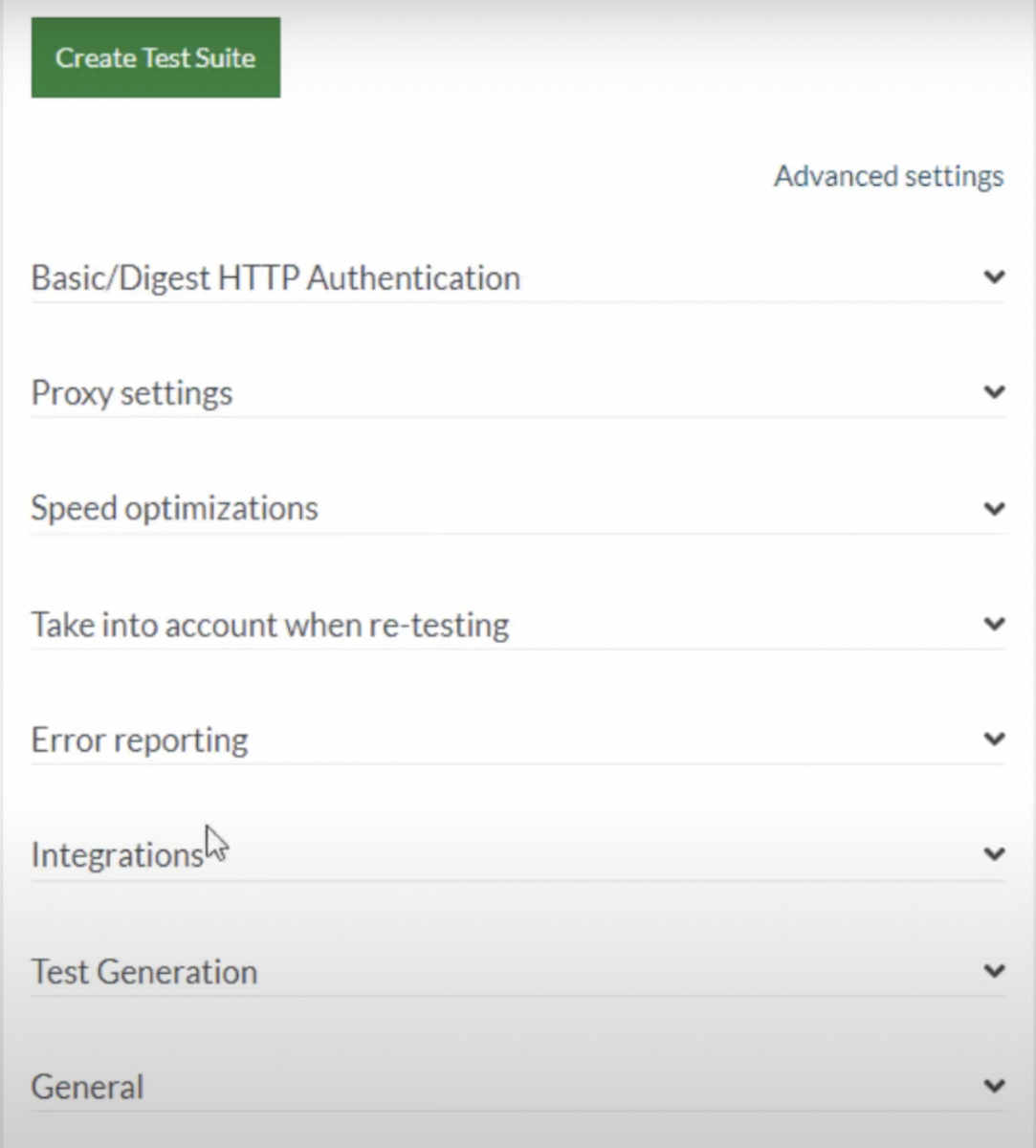 Once it is filled, press “Create Test Suite”.

From here on, we need to test our applications. Future posts will cover this in detail.

If you have already signed up to the platform, you can choose to log in with multiple options: 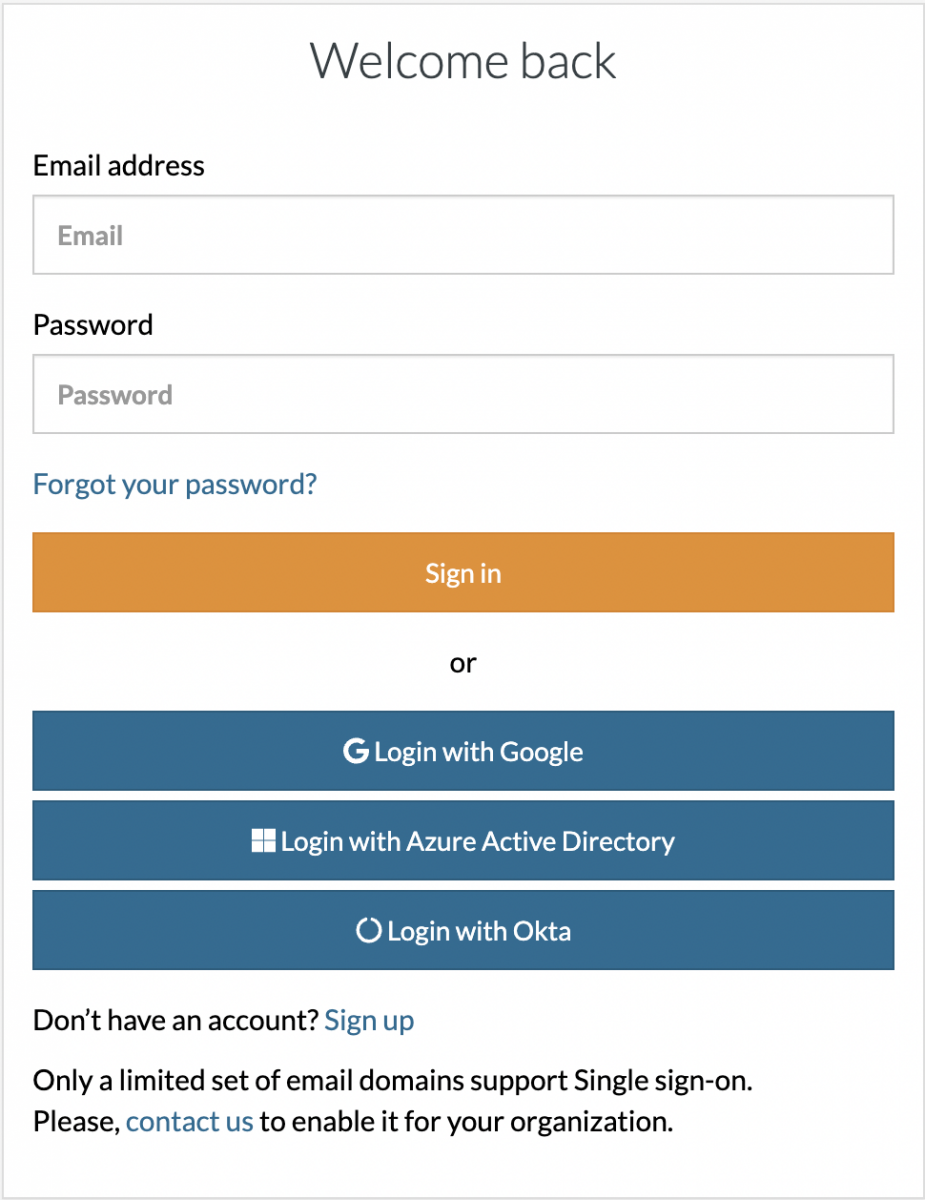 We still have a lot to catch up

With this brief introduction to the test automation tool testRigor, I am sure you must have become intrigued to try some more cool stuff with it. After all, writing test cases in the English language and that too self-healing is a great choice for your upcoming projects. The costs saved in your multiple projects are extremely high and can be spent on other useful things to make a better product.

In the upcoming posts, we will try to bring you some more insights into this tool with hands-on examples. For any feedback and comments, do let us know via email at faq@toolsqa.com.

Thank you for your time.