In the previous tutorial of REST API Test with RestSharp, a test made a call to Weather REST Service. This tutorial will also continue the same example.

Functional testing of REST Services involves verifying the Responses returned from various End-Points. Some of the important test verification are

This tutorial will cover the following verification for Response Status :

From the previous First RestSharp Test example, a simple test which calls the Weather web service using a Get Method looks like this

How to Validate Response Status Code?

IResponse is an interface which has lots of properties, mostly which can help to get parts of the received response. Look at some of the important properties. A simple response followed by a dot (restResponse) would show the available properties on the response object. As shown in the image below. 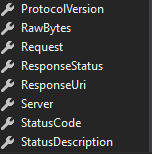 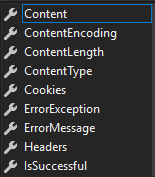 As noticed above, StatusCode can be used to get the status code of the REST Response. This property returns an HttpStatusCode which is an Enum.

Below line of code, convert the Enum Status Code to Integer from the IResponse object:

Extracted status code is compared with the expected value of 200.

Try running the test and notice that the test will pass. This is because the web service indeed returns a status code of 200. 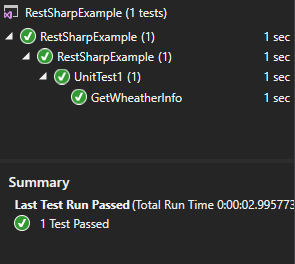 How to Validate an Error Status Code?

City name that this test will use here is an invalid string, like ‘abcdef”. Just copy the code from previous test and simple replace the city name with “abcdef”. At this moment do not change the status code. The code looks as shown below

Now run your test class and check the result. Our negative test GetWeatherDetailsInvalidCity will fail. The reason is that the web service returns an error code of 400 when invalid city name is sent to it. However, the test is validating for expected value of 200 as shown in the image below. 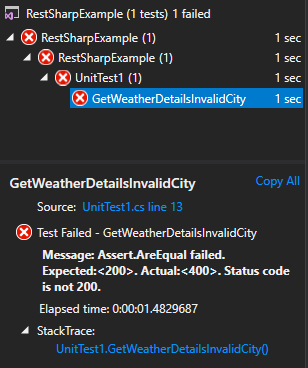 A quick change in the expected result in the code will make sure that this test passes. Update respective line as in the code below:

Just as we get the Status Code as mentioned above, we can get the Status Description & Protocol Version as well. To get these properties we will simply call the Response.PropertyName. Here is the code to do that.