Before we start, it is very important that you go through the previous set of Tutorials. You can take a look at the tutorials here

How to Deserialize JSON Response to Class with Rest Assured?

Let us continue with our previous chapter Making a POST request using Rest-Assured. In the previous chapter, we made a successful post request and the following Response body was received.

In order to convert the JSON into a Class representation, we will first create a class that has all the nodes present in the JSON. The Success response above has two nodes

The value of these two nodes is String. Below image shows the parts of the response.

To represent such a Json we will need a class with two String variables, each representing the node in the Json. Below is the class code. Pay attention to the code comments for finer details

From previous tutorials we know that a Response body in Rest-Assured is represented by io.restassured.response.ResponseBody class. This class has a method called .as(Class<T>). Where Class<T> is a generic form of any class of type T. In our case Class<T> is RegistrationSuccessResponse.

This method call will internally do two things

To visualize it, let us look at the image below. 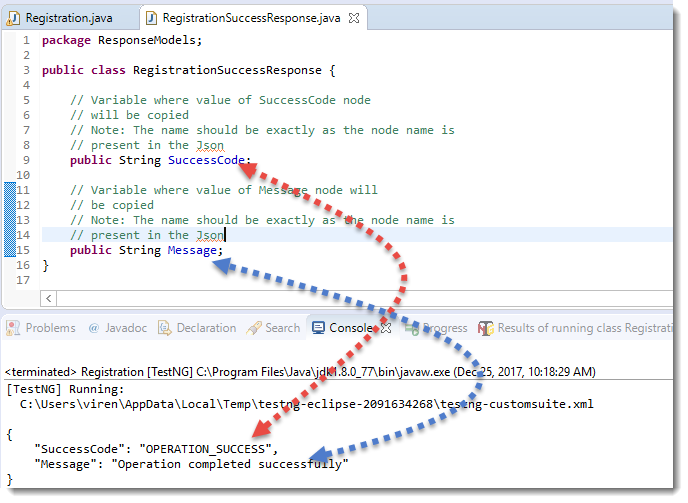 Below is the code that uses the Response.Body.as(Class<T>) method.

Let us also see the responeBody variable in Debugger to see what values it gets. We will put a break point just after line number 18, below image shows the values of responseBody

Now you can use the responseBody variable to apply any assertions that you want or may be pass it as an input to other tests.

How to Deserialize JSON Response Body based on Response Status?

In real life it is possible for a REST Api endpoint to return multiple Json formats. For e.g. the API in this tutorial can return a completely different response in case of Failures. Below is the Json that is returned in failure cases.

If we try to Deserialize this response into RegistrationSuccessResponse, it will not work. The reason is that while Deserializing Rest-Assured will not be able to find SuceessCode and Message fields in the Response body. As a result the two variables will be set to null.

We can see that there are two nodes that are present in Failure cases.

Below is the class that can represent a Failure response.

To determine which scenario to execute we can simply put an if check in the Test code. Below is the updated Test code.

Note: This is not the most ideal way of handling these types of cases. If possible we should rely on Inheritance to cater to varied Responses being returned by an API endpoint. In coming tutorials, we will see how we can implement an inheritance chain to handle these cases.