Every HTTP Response received as a result of an HTTP request sent by the client to the server has a status code. This status code value tells us if HTTP Response was successful or not.  This article is a continuation of our previous article in which we performed a sample REST API test call. In this article, we will discuss how to validate the HTTP response status using REST Assured. The content of the post is reflected by the following index:

We have a detailed article on HTTP Response here.

As we already know the same REST API returns a response message in XML or JSON format. This format depends on the Media-Type attribute in the HTTP request.

But then how will the client know what type of response it will get from the API? Well, this is managed by the response headers. Response Header contains a Content-Type attribute that informs about the type of response body format.

Consider the Swagger UI example we discussed in earlier articles. Suppose we send a GET request to the Book Store through our browser as follows:

When the above command executes we obtain the response shown in below screen:

As seen from the above screenshot, the response has a status, headers, and a body. If we check the “Response headers” section, in the above screen, it has a content-type attribute that has the value along with other attributes. On validating this header, the client knows what type of response (body) we can expect.

Let us now proceed with validating the status part of the response. 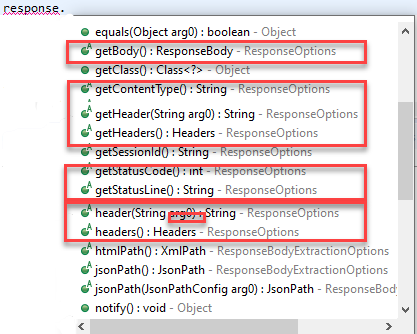 The method getStatusCode()  is used to get the status code of the response. This method returns an integer and then we can verify its value. TestNG Assert is used to verify the Status Code. Now consider the code given below:

The below line of code extracts the status code from the message:

The return value “statusCode” is compared with the expected value i.e. 200. If both values are equal, then an appropriate message is returned.
If you run the above test, you will see that the test passes since the web service returns the status code as 200 as shown in the below image.

In this manner, we can verify the status code of the response using the “getStatusCode()” method of the response interface. Please note that since we already knew that the success code here is 200, we wrote the appropriate code. Your server may respond as success with a code anywhere between 200 and 299. It is best to check that out beforehand.
Let us now move on to discuss how to validate the status code that returns values other than 200 i.e. error status code.

How to validate the HTTP error status code?

So far the request-response situations are all good and we have only received 200 status codes indicating successful requests. But this may not be always true in the real world. There can be reasons like the server is down or REST API not functioning properly or the requests themselves may be problematic. In conclusion, we may face the following scenarios:

So when any of the above scenarios occur, the REST API will return an appropriate status code other than 200. The client in turn has to validate this status code and process it accordingly.

For the ToolsQA Book Store service, let’s create another test with an erroneous scenario. Here we will validate the HTTP status code returned by Book store Web Service when an invalid parameter is entered.

When we run this test it returns the error code of 401. We can see the result of the test execution below.

Note: We can make a quick change to the code above to make sure the test passes. This change is shown below:

So here we expect the value returned to be 401 instead of 200, hence the test is passed.
Next, we will validate the “Status line”.

How to validate the response status line?

A “Status-Line” is the first line returned in the HTTP response. The status line consists of three substrings:

For example, when the request is successful the status line will have the value “HTTP/1.1 200 OK”. Here, the first part is the HTTP protocol (HTTP/1.1). Next is the HTTP status code (200). The third is the status message (OK).

We can read the entire status line using the method getStatusLine() of the response interface. The following code shows the demonstration.

Here we perform a similar test as we have done for the status code. We read the status line using the getStatusLine() method into a string value. Then we compare this returned value with “HTTP/1.1 200 OK” to check if the status is successful.

A video tutorial for Verifying the Status code is available at Verify Status Code in Rest Assured.

In this article, we have discussed the HTTP status validation in REST Response.

I am Shilpa Nadkarni, a freelance software professional, and content-writer. I have around 10 years’ experience in software development mainly in Microsoft Technologies. I am always learning new technologies and find myself up to date with the latest software technologies. You can follow me on LinkedIn